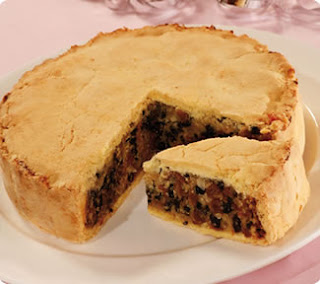 Traditional recipe for New Year Black Bun cake which is usually eaten on Hogmanay. Easy recipe with information about the history and traditions about Black Bun:


This easy Black bun recipe will serve 12 - 16 people. Scottish Black bun is a traditional Scottish treat served on Hogmanay and over the New Year festivities. It is a rich, moist, fruit cake baked in a pastry crust.

A sign of a well made Black Bun is that it should stick to the knife as it is cut.

In olden days sweetmeat Black Bun cake slices would have been served on Twelfth Night. It then became a Scottish New Year delicacy and treat.

1.Sieve the flour and the salt.
2. Rub in the butter and then mix in the water. The dough should start to become stiff.
3. On a pastry board roll out the mixture into a thin square.

Set aside and make the black bun filling.

1.To make the filling for Black Bun you should first grease two 2lb loaf tins or a large tin.

3. Now stir in the dried fruits of currants, raisins, sultanas, candied peel and the chopped almonds.

4. Gently fold in the beaten eggs and the buttermilk until the mixture becomes soft and moist.

6. Use about two thirds of the pastry to line the tins. If the pastry has to be joined then wet these so that a good seal is formed.

7. Put the black bun mixture into the tin, on top of the pastry. Make sure it is packed firmly and then level off.

8. Brush the top of the fruit mixture with the white of the egg.

9. Cover this top with the remaining pastry and seal the edges.

10. Brush the visible pastry, ie the top of the black bun, with a beaten egg or some milk.

11. Prick the black bun with a knitting needle from the top all the way to the bottom so that any trapped air can escape through this hole, rather than burst through during cooking.

12. Pinch around the edges to give a nice finish.

14. To prevent the bun turning brown too quickly cover with kitchen foil or brown paper at any time during the cooking.

15. Remove from the oven and set aside to cool down.

16. Turn out from the tin and store in an airtight container until ready to eat.

THIS BLOG IS NOW READ IN THE FOLLOWING 146 COUNTRIES;